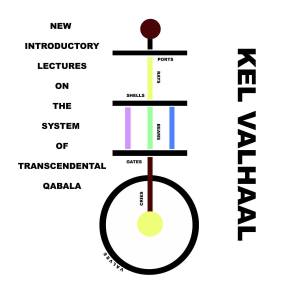 Kel Valhaal’ may be a name that you recognize if you’ve been paying attention to the notorious transcendental black metal group Liturgy in recent years. The name appears as the title of a track in Liturgy’s latest controversial album ‘The Ark Work’, which saw a fusion of black metal, electronic and even rap music – perhaps more controversial is the philosophy which frontman Hunter Hunt-Hendrix builds Liturgy’s music upon, but I digress.

Less commonly known is that ‘Kel Valhaal’ is a pseudonym adopted by HHH for his solo artistic exploits – which verge heavily towards electronic and rap music rather than metal. Having operated under this moniker since 2010, Kel Valhaal finally sees its first release titled ‘New Introductory Lectures on the System of Transcendental Qabala’ due for release on July 15.th.

“But Cerpin”, I hear you cry, “That doesn’t sound like prog at all!” – well that is true, but it’s the experimentation in Kel Valhaal’s music which is worthy of commendation as well the branching between electronic and metal music being a topic of interest in general. For instance, Jake Bowen from prog metal / djent band Periphery released an ambient / trip hop album ‘Isometric’ earlier in 2015, which I for one preferred over his main project – regardless of preferences, it’s interesting to see genres that are nearly poles apart be interlinked, especially within Liturgy and Kel Valhaal.

‘Tense Stage’, the first song released earlier today from ‘New Introductory Lectures…’, reminds us of the pseudo-raps found on The Ark Work’s ‘Vitriol’ but with a heavier, hard hitting synth and electronic drum beat around HHH’s cries, bar-spitting and glitched vocals. By the end of the track, there’s a miasma of beats, clockwork-like ticking and whirling synths buzzing round that becomes almost hypnotic as the song reaches its climax.

It’s staggering how someone’s sound can progress from black metal, such as Liturgy’s Renihilation to experimental electronica, respectively Kel Valhaal’s upcoming release – don’t you think? Is Hunter Hunt-Hendrix and his respective acts amongst the most influential and commendable in the experimentation of music in recent times? Who else do you think is worthy of note for pushing the boundaries of music and the relationships between genres recently? Leave your thoughts in the comments below!