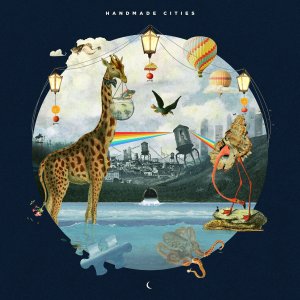 Unless you’ve been living under a progressive rock, you’ll have heard of Plini – the budding Australian guitarist who has stormed his way to the forefront of melodic prog from the comfort of his bedroom. Handmade Cities is his first full length album following a trilogy of EPs and tests Plini‘s ability at lengthy songwriting, producing another display of self celebration.

Opener ‘Electric Sunrise’ starts the album incredibly strong with its toe-tappingly catchy rhythm and roaring guitars, followed by an equally solid funky and djenty title track, presented with immaculate detail with ricocheting breakcore-esque drums. The single ‘Every Piece Matters’ errs worryingly close towards being generic and stifling as guitar solos trip over the song’s plodding rhythm. Aside from a few funky fills it falls short from what ‘Inhale’ achieved prior to it, even with Plini‘s debut appearance of anthemic vocals which admittedly is quaint to see – maybe this is a sign that we’ll be seeing full vocals on his future works.

Plini hides pools of meditative states throughout Handmade Cities; the slow, mystifying intro of ‘Inhale’ and the relatively subdued ‘Pastures’ bring well needed pauses between the intensity his music reaches in this album, especially the short lived, explosive splendor of ‘Here We Are, Again’. Unfortunately, these heights aren’t found in the closer ‘Cascade’ and the album reached its climax prematurely; this song has such a scatterbrained structure, rivaled only by the random album art, that it ends the album on quite an unsatisfying note.

Curiosity begs the question: what does Plini sound like outside the comfort of his niche he’s carved? Perhaps necessity will force him outside his signature sound before stagnation takes hold in future releases, but for now, Plini has done what Plini does best: no-nonsense, tightly produced melodic prog that stays true to his sound. If some of the fat was cut off, Handmade Cities could have been his strongest release yet.